Liverpool Runner Heads to Paris to Raise Money for Hospice 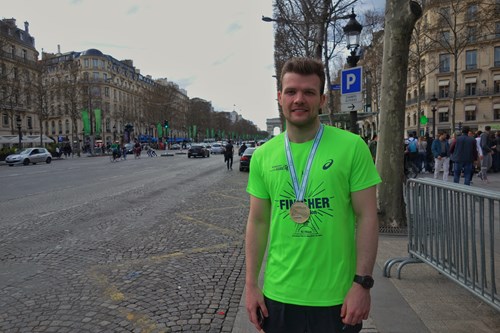 Sam took on the challenge following a tragic summer last year when he lost both his granddad, William Heague, and his cousin, Charlotte Chee, within the space of a week.

Sam ran the marathon to raise money for St. Joseph’s Hospice and The Walton Centre in their memory. It was his second marathon, following last year’s London Marathon, and he successfully completed the course in five hours, despite an injury.

Sam said: “My grandad Bill was a gentle and loving family man. He was diagnosed with latter stage pancreatic cancer around two months before he died and was initially cared for in Fazakerley Hospital before being moved to Jospice. During his time at Jospice he received exceptional, specialist care, as well as an unwavering kindness.

“In his own darkest hour he was treated wonderfully and my dad and his brothers were able to stay there with him at the hospice. From diagnosis he grew very weak, very quickly, but never lost his sense of humour and was courageous until the very end.

“My cousin, however, was 24 when she died. She was receiving treatment for colitis, which sadly caused a seizure and a brain haemorrhage. She too was treated wonderfully at the Walton Centre.”

Mike Parr, Chief Executive of St. Joseph’s Hospice, said: “Sam has taken on a real challenge following such a devastating loss and has raised a fantastic amount of money in memory of his granddad and cousin.

“We would like to congratulate Sam on this wonderful achievement and we are very grateful for his support in helping us to continue providing specialist care for our patients and their families for as long as they need us.”